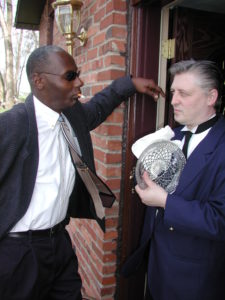 Nocturnal is a supernatural web series in the tradition of the classic Dark Shadows. The series premiered on the internet in March 2007. New webisodes are currently being produced with a launch date still to be announced.

Shot on location in and around Pittsburgh, PA, (though the city has never been explicitly named) the series revolves around the mysterious circumstances surrounding the murder of a young woman named Natalie Brew.

Not unlike Twin Peaks, the identity of Natalie’s killer is one of the series’ overarching mysteries. And, as police investigators Archer Reilly and Sarah Pennington discover, there is no shortage of suspects. Did she run afoul of the wealthy and powerful Hawthorne family—led by its patriarch Jebediah—whose power came as a result of dealings with dark forces? Or was she another in the seemingly endless victims of Dr. Ulrich Von Der Linn, a vampire masquerading as a hypnotherapist?

As with any series of this nature, there is also a host of secondary characters with their own roles to play in the proceedings including Jebidiah’s nephew, Frankie, a cursed musician; Aphonso Cristillo, a seer; Cherie Meadows, an alluring witch; and Jebidiah’s son, Marcellus, who harbors his own dark secrets.

The series was directed by David Silvio who directed and produced the cannibal thriller Meat for Satan’s Icebox and more recently Fetish Dolls Die laughing. The Series is produced by Kiss of Death Productions in association with Baywood Films.